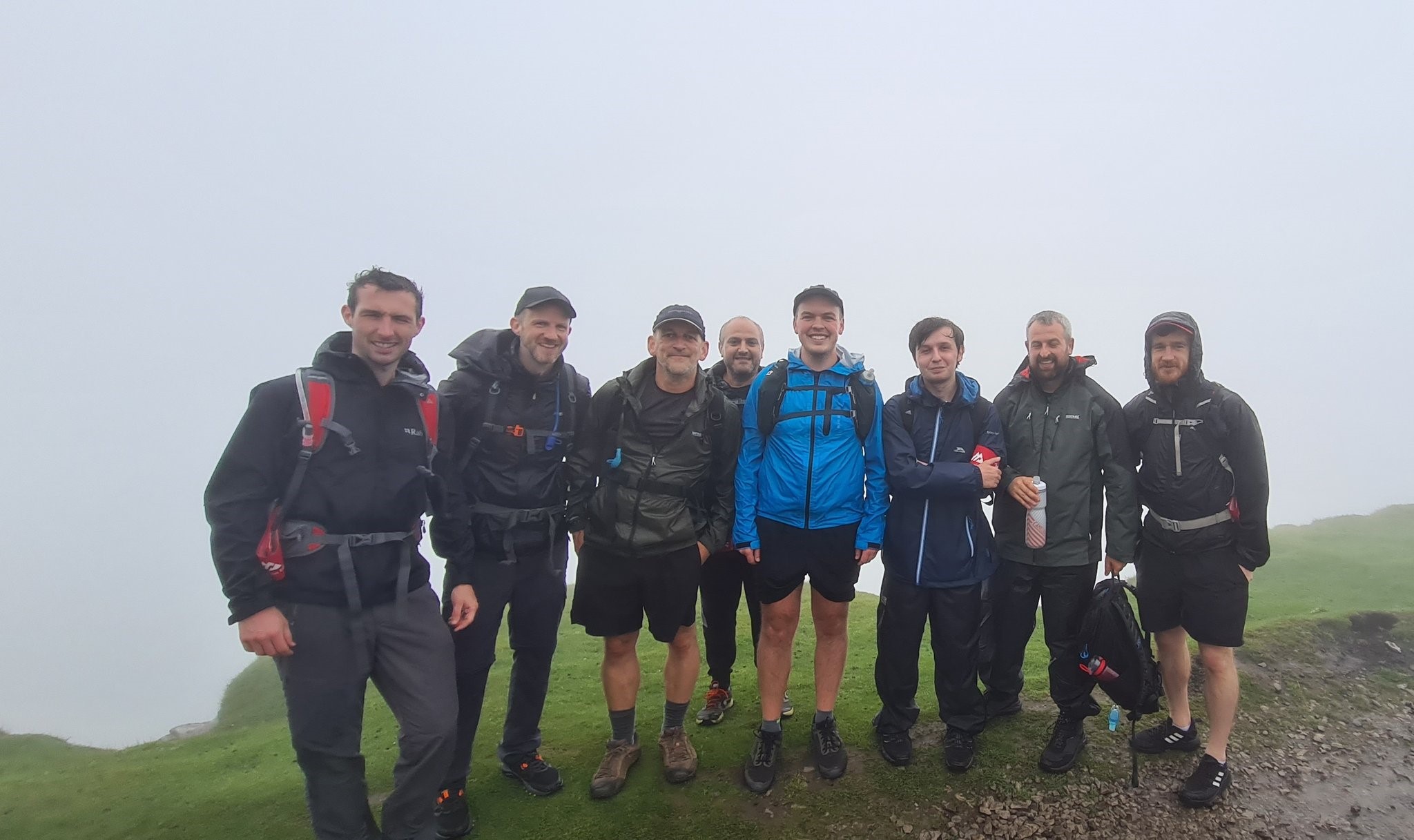 The Rochdale business picked the wrong day to scale the Yorkshire Three Peaks, but still made thousands of pounds for a great local cause

Rochdale IT specialist MysonPages is the kind of business that likes a challenge. But in its day-to-day experience, trials tend to arrive in the form of lost connectivity, managing cyber threats and keeping their customer base happy.

It was a different kind of test that awaited six members of the MysonPages team as they set off to conquer the Yorkshire Three Peaks challenge at the end of July. Zen Internet Chairman Richard Tang - MysonPages is a Zen partner - was also in the group that day.

The team was expecting a tough but pleasant hike on a midsummer day. Success would involve walking 24 miles and climbing 5200 feet in under 12 hours.

That’s a challenge, but a very do-able one for a team that had spent the last few months completing regular walks on the moors around Rochdale (even if a couple of the walkers “hadn’t walked past the cafe” up until then).

They also had the extra motivation of a really good cause. The walkers would be raising money for Rochdale’s Springhill Hospice.

And they did it. Every member of the group completed the walk. MysonPages managing director David Brereton says that doing so “gave everyone a huge sense of satisfaction - it was a great achievement.”

And it really was. Business development manager Jack Lyons talks about everybody chatting and laughing as they set off, and “the sense of a plan finally coming together.” It’s fair to say that the holiday atmosphere didn’t last long.

To cut a long story, MysonPages picked what was probably the worst day of the summer to attempt the Yorkshire Three Peaks. The rain started early and didn’t stop. On the tops, visibility dropped to 20 feet. At one point, the walkers were up to their shins in muddy water.

“At one checkpoint our colleague was asked if he was OK because he had a blue face,” says Jack. “Visibility wise, it was like walking miles and miles into fog. We heard the guides say that it was in their top five worst conditions for doing the walk.”

David adds: “I reckon it was twice as hard as a normal day. We all ended up with neck ache, because you spent 12 hours looking down at your shoes. By the end there was no real difference between the inside of your waterproofs and the outside.”

Cold, soaked and exhausted, but the team agreed that it was all worth it. So far, they’ve raised just over £6,000 for Springhill, four times more than their original target. The JustGiving page is still taking donations here.

“The money we’ve raised has been sensational,” says David. “But the best bit has been seeing how it impacted people in the team, and them recognising their personal achievements. We’re a good team, but this has cemented it.”

Would they do it again? “There’s already an assumption that this won’t be a one off,” says David. “We’ve just got to find out what we can do next.”

Jack adds: “There’s a chance we might do even more next time, maybe over a few days. But it would also be good to get more of the team involved. The good thing about doing this challenge again is that it would be really hard for the conditions to be any worse!”

Did they peak too soon? Well 24 hours later, it was glorious…

Here is the full video of the walk

Recruitment Solutions North West is an extremely successful business that has prospered in Rochdale because of the town’s great connectivity, excellent public transport, its close proximity to Manchester city centre, competitive rates and an ever growing client base.

Rochdale was the ideal location for us due to its transport links and proximity to Manchester and Leeds. It gives us a great catchment area for the recruitment of apprentices, graduates and skilled workers.

Kingsway Business Park was the ideal location when the company outgrew its previous base, with a direct link to Junction 21 of the M62 and a dedicated Metro (tram) stop.

Our move to Rochdale has provided enormous benefits both in terms of cost to the business and benefits for our staff. We have acquired a fantastic building for an extremely competitive price which has enabled us to free up resources to further expand the business.

Crystal Door celebrates 25 years established in Rochdale. Enjoying the successes of our business with the supported of a fantastic local team of employees, business, community, organisations and local Authority. Co-operation at its best.

Today, our skilled workforce is made up of people who commute from all areas of Rochdale and the surrounding areas. The business has continued to grow, we have successfully recruited high-calibre individuals for a variety of roles.

Nothing ever stopped me leaving Rochdale. I’ve worked away. I’ve travelled. But I’ve always wanted to come back. We can take for granted what we have here but this place has a lot going for it.

Rochdale is a town ahead of the curve - a place where innovation and technology thrive, with history as its hallmark, bursting with skills and talent equipped and ready to work. Hopwood Hall College prides itself on collaborating with the business community, focusing on future skills, setting Rochdale apart. With an enriched offer, Rochdale businesses can draw on a large pool of talent and have access to training that meets their needs.

As a family run business, employing local people, it is important for us to feel well supported by Rochdale and the many other brilliant businesses in the area. This is something RDA and Rochdale do really well. It enables us to continue to grow and provide yet more opportunities for our team and the wider community. Our location at Junction 2 of the M66 provides us with the ideal position to distribute to our customers across the North of England

The numbers that tell our story of our success and accomplishments

Rochdale is open for business. Our library of films explains why